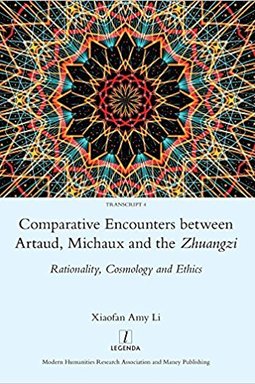 Comparative Encounters between Artaud, Michaux and the Zhuangzi: Rationality, Cosmology and Ethics

"The encounter between different minds and perspectives across time and space has always haunted the literary and philosophical imagination. Just such an encounter is staged and played out in this comparative study, which connects the twentieth-century Francophone writers Antonin Artaud (1896-1948) and Henri Michaux (1899-1984) with the ancient Chinese text Zhuangzi (c. 4th-3rd century BCE). These disparate texts are bridged by questions that draw them into close dialogue: how can Artaud and Michaux, who read about and admired ancient Chinese literature and culture, be rethought through certain philosophical concerns that the Zhuangzi raises? If the points of conceptual intersection focus on rationality, cosmology and ethics, what can they tell us about these important issues? By imagining, constructing and developing this thought-encounter, Li re-envisages Artaud, Michaux and the Zhuangzi through the kaleidoscope of comparative interpretation, juxtaposing and recombining ideas and contexts to form new patterns and meanings. (Editor's Note)

This intelligent book raises important issues about comparative literature at its most
challenging, and its very theories and ways of working compose the subject of the first chapters. — Mary Ann Caws, Graduate Centre, City University of New York

Li’s work provides a new and noteworthy model for “comparative encounter.” [...] it is the first Western-language publication to engage the Zhuangzi in terms of comparative literature. As such, it is radical in the best sense of the word: it is innovative in its selection of authors/texts and it takes interpretive risks that lead to unexpected insights as well as an alternative comparative methodology. — Louis Komjathy, University of San Diego

Literature and the World

Power and the Self